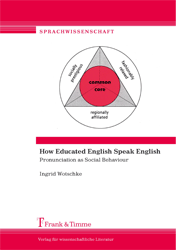 Pronunciation as Social Behaviour. How do educated English speak English? Does it sound like Oxford or rather like Cockney? Why did traditional pronunciation habits and criteria of acceptability change radically during the 20th century, when even the BBC world service got a new sound? How to cope with the impacts of this change; what is the actual 'standard'? Speech accent is not only a regional, but also a social marker. Ingrid Wotschke discusses educated pronunciation in its changing social contexts, supported by numerous speech samples and illustrations. Besides, she presents the alternative model of current Educated English English. 277 Seiten mit 23 Abb., broschiert (Sprachwissenschaft; Band 21/Frank & Timme Verlag 2014) leichte Lagerspuren