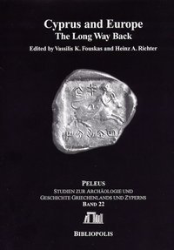 The Long Way Back. Edited by Vassilis K. Fouskas and Heinz A. Richter. This edited collection of 12 essays is a comprehensive attempt to set the Cyprus issue in the historical perspective of the 20th century international and European affairs by way of examining the role of exogenous actors in the domestic evolution of Cyprus politics and ethnic conflict: from the lease of Ottoman Cyprus to Great Britain in 1878 to the negotiations for the accession of the island to the European Union in the 1990s and early 2000s; and from the independence struggle of the 1950s to the Turkish intervention and full-scale invasion. 212 Seiten, gebunden (Peleus; Band 22/Bibliopolis 2003)